Married to the Sea

Gabe: I will be discussing my thoughts on the ending of Mass Effect 3. ****SPOILERS!*** I chose the “green” ending and felt very satisfied with the conclusion. After wrapping it up I decided to go online and figure out what everyone seemed to be so upset about. This article on Gamefront seems to do the best job of summing up all the complaints. I’ll just go down the line and try and cover each of the five points listed there: Brevity The claim here is that five years worth of gaming is wrapped up in a ten minute cut scene. I guess this

#810; The Evaluation of Wishes

Part 3 of our tale. Continued from Part 1 / Part 2
Thanks to Marskman Steven L. for the dubnium tip. 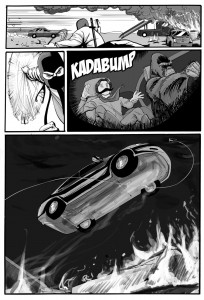 I don’t know about where you are, but it is absolutely gorgeous out today, and I’m almost over my plague. Let’s concentrate on happy stories today.

² And I’m going to acknowledge up front that almost nobody smaller than a mid-sized corporation has the resources to engage in this kind of customer service. That alone doesn’t explain its rarity, as those that do have the resources typically don’t.

³ Where the “we” probably refers mostly to Brian Sunter, who is seemingly everywhere that merchandise and fulfillment occur on PA’s behalf. He’s like a magical shipping ghost made out of Khoo’s sentient shadow.

A plot, it is plot time.

Detectives Stabler, Benson and Strauss pulled up to the crime scene in Stabler’s department vehicle. It was a step down from Strauss’s standard-issue Camaro, but he didn’t mind anything if it led to a collared perp. That’s short for ‘perpetrator.’

“Looks like you beat us here,” Stabler called out to Munch and Fin, already walking the police line. Munch nibbled on a footlong, like he did. Helped him concentrate on the scene. Good old Munch — either something was going into his mouth, or something funny and crazy was coming out of it.

Strauss hollered at him: “Hey, what are you munching, Munch?” Detective Munch just smiled and shook his head laughing. No one had thought of that before and he was glad someone finally noticed. This guy’s gonna fit right in, thought Munch as he chuckled.

But the appearance of Medical Examiner Warner changed those chuckles into stern looks of taut-lipped disgust. “Found the victim in pieces in this alleyway. Her hands were chopped off along with her face. No way to ID the body yet.”

Benson sneered. “Sounds like someone didn’t want us to know who they chopped the hands and face off of.” Stabler looked like he wanted to punch something, but more than usual. Fin just stared icily at Munch’s half-chomped dog. The hot dog was now cold, but not as cold as the blood in Fin’s pissed-off veins.

“Sounds like the guy I’ve been looking for for the past two years,” said Strauss, making his way through the small assembly of cops and techs. “Hello Melinda,” he said to Warner.

“Christopher,” said Warner. “It’s been a while. You still look great.” She and Strauss had had a fling when he worked for Elite Crime Halt Operations (ECHO), before he moved on to specialize in extreme sexual criminals in Predator Strike Force. The sex was great, but neither of them could take their minds off their jobs long enough to make a commitment, even though the sex was great.

“Melinda, please. Not here in front of the victim who deserves our respect,” said Strauss.

“Right,” said Warner, rapidly switching back to Medical Examiner Mode. “I determined the time of death by carbon-dating soil samples I found on the victim’s boots. She died at 4:33 AM last night of asphyxiation caused by strangling. But the amputations were made after the assault and her death.”

“At least she didn’t have to suffer through that indignity too,” said Fin, who looked like a bulldog about to break off his chain and take a bite out of crime.

“First responders round up any witnesses for us?” asked Benson, who was so focused on surveying the crime scene that she forgot her collar button was undone, so Strauss was in perfect position to look down her top, but he didn’t even notice because he was too much of a professional.

“Only one, and it’s a doozy,” smirked Warner. “A parrot in a neighbor’s window by the name of Milky.”

Damn, thought Strauss. I can’t look into the parrot’s past by shaking its hand… parrots don’t have hands.

But I’m not like that. A cartoon that’s not my best will gnaw at me, and even though I fully realize it will probably never BE my best, I keep pondering how I might improve it.

Here’s today’s cartoon, as I should have thought of it, at any point before it went live, midnight, last night:

And here’s how it originally ran:

Again, STILL not the best I’ve ever done – that’s OK, you can’t do your VERY best every single day – but, I feel, the new one is at least a significantly stronger, less “hit-em-over-the-head” take on today’s throwaway gag.